Leopard in the jungle…. In the city! 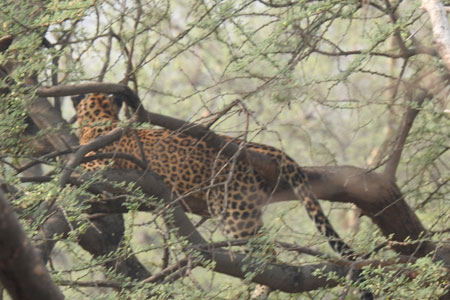 Leopard in the jungle…. In the city!

Jaipur is a city of 4 million plus population.

It is a noisy, bustling, active, growing city with it shares of traffic jams, honking cars and concrete jungle.

Yet, amidst all this chaos Jaipur is also a city that never ceases to amaze!

Jaipur is also a city with a surprising natural beauty. It is located in a bowl surrounded on three sides by Aravali range that in most parts is quite well forested.

One such forest is the small but well wooded and picturesque one of Jhalana.

It is a protected area with a surprisingly large population of leopards and also other animals like Jackal, Hyena, blue bull (or nilgai) etc.

There is peacocks by the thousands, langurs and moneys by the hundreds and even small herds of spotted deer and a growing population of sambhar deer. There are a lot of reptiles including monitor lizard and lots of species of snakes. The park is also getting a growing reputation amongst bird watchers as the place to see many species of birds especially in winter months when a lot of migrant birds make this forest as their home.

The forest department has allowed jeep safari torus in the park with a guide.

The leopard population here is 27, in an area of about 50 sq kms. This means that you are virtually assured of a leopard sighting on a safari here, and this is not a zoo. It is a jungle!

On your next trip to Jaipur, spare an afternoon or morning for a visit to the green hidden gem of Jaipur, the pink city of India! You will come back refreshed, and surprised, promise!